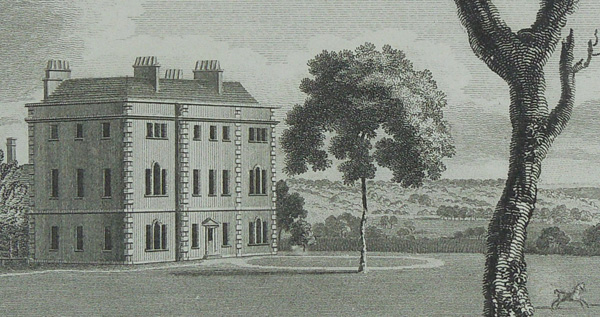 From 1600 - 1850 the material used for creating these plates was generally copper up until the early 19th century when steel was invented and proved more economical (because steel was harder the printing plates lasted longer). The engraver worked with a lozenged shaped tool called a Burin or Graver. Lines were made using this tool by applying different amounts of pressure, the engraver would create texture and tones also by altering the angle of the tool and when lines were incised closer together this created a darker area. The plate would therefore be made up of many lines with different spacing. Ink was then applied to the plate, it was wiped so only the ink remained on the engraved lines, the engraved, inked plate was then pressed onto damp paper to produce the image. Engraving was a very timely process.

Invented in about 1650 by Jan Van de Velde in Amsterdam, aquatint prints became most popular in the 18th century. Aquatint is thought to be one of the most complicated of printing techniques. Named aquatint not for the use of water in the process but for the appearance of the finished print, said to resemble water colour / water colour wash. A copper plate is used and is then sprinkled with a powdered resin and then heated so the resin melts, it is then exposed to acid, the acid bites away at the plate, only where the gaps of resin exist. This creates a pitted surface and when areas of the resin grain are removed this creates tone. Parts of the plate can then be exposed over and over again to acid baths to create more tones. The artist will then create the desired image, tones are also created by the artist scraping or rubbing. Engraved lines were also used to enhance the design. Finally when the design/image is complete, the plate is then inked and passed through a printing press together with a sheet of paper.

Invented in Germany in 1796 by Johann Alois Senefelder, the lithography process is still used today. Unlike the other traditional methods, the image is not etched or engraved on to a plate, lithography printing is based on the principal that oil and water do not mix. A flat limestone plate is used and the artist will draw on the plate with an oil based medium (wax crayon or fat) and when the drawing is finished a solution of gum arabic and water is applied to the plate, this soaks into the stone but not the oil based drawing. The printer will then use turpentine to remove the oily crayon, these areas now free of wax will take the ink where as the gum arabic / water will not. The hydrophobic image is then covered in ink, the stone and paper are then pressed together with equal pressure and the ink is transferred to the paper.

Etching has been used in Europe since medieval times but etching used for printing and book images started to become popular at the end of the 15th century. A metal plate is used (copper, zinc or steel), the plate is covered in a waxy ground which is made up of asphaltum, rosin and beeswax, which is resistant to acid. The artist then scratches off the ground to create his design / drawing. Once finished, the plate is dipped into an acid bath, the acid only bites into the exposed metal, leaving sunken lines in the plate. The remaining ground is then cleaned off the plate. Ink is applied to the plate and wiped leaving ink in the sunken lines only. The plate is then pressed on to damp paper to create the print.